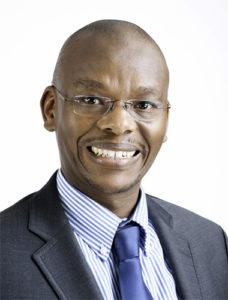 Tembinkosi Bonakele has been the Commissioner of the South African Competition Commission since 2013. Mr Bonakele joined the Commission in 2004 and occupied various positions in the Commission’s core divisions. He was appointed Deputy Commissioner in 2008, and prior to that worked as head of mergers, head of compliance, and senior legal counsel respectively.

Mr Bonakele is an admitted attorney and previously practiced with Cheadle Thompson and Haysom in Johannesburg largely in the areas of labour law, regulation, and health and safety. He has also spent a year working in corporate finance and antitrust groups at Clifford Chance, New York office.

He has published widely in academic journals and writes for newspapers and business magazines on competition matters. He has recently co-edited a book titled, Competition Law for the New Era. He holds a BJuris and an LLB from the University of Fort Hare and an MBA from Gordon Institute of Business Science, University of Pretoria. He took law and social science courses at the University of Amsterdam as an exchange student.

Bonakele is an activist who has been a leader in the youth and student movement and is a former President of the Student Representative Council of the University of Fort Hare.

He is a recipient of the Black Management Forum’s Black Excellency Award and is a regular speaker at international competition policy conferences.